Coming soon from our 419 - Hemp Oil network partner there will be free Hemp Oil Samples!

ONLY $7.95 SH as the sample itself is free and we will ship to all 50 states for one low cost!

Brought to you by 4:19 - Your newest Hemp  and Best CBD Oil Distributor

Email FREE  @ cbdsample.com  with your name, email and/or contact number.

DO NOT FORGET TO TAKE SPACES OUT - This is to prevent spam to them.

*this includes one small tincture sample or DROPS.  Paste and High CBD products may be an additional charge however unlike many other suppliers we will gladly do a daily or weekly dosage as sample at bulk pricing.
Posted by B at 12:11 AM 2 comments:

"Miracle" Cannabis Oil: May Treat Cancer, But Money and the Law Stand in the Way of Finding Out

"Miracle" Cannabis Oil: May Treat Cancer, But Money and the Law Stand in the Way of Finding Out According to Dr. William Courtney, the western medical mind has a very hard if not impossible time trying to understand the diverse actions of Cannabidiol.

He explains how his youngest patient who is 8 months old, had a very massive centrally located inoperable brain tumor. The child’s father pushed for non-traditional treatment utilizing cannabis and put cannabinoid oil on the baby’s pacifier twice per day, gradually increasing the dose.
Within two months there was a dramatic reduction. Dr. Courtney pointed out that the success of the cannabis approach means that “this child…is not going to have the long-term side effects that would come from a very high dose of chemotherapy or radiation.
While 10,000 year old cultural practices involve drying then heating cannabis to effect a nearly complete decarboxylation of THC-Acid into THC. The creation of massive amounts of THC is compounded by the introduction of a psychoactive side effect that has a 10 mg dose limitation secondary to CB1 receptor stimulation. Research conducted in Bethesda Maryland led to Patent 6,630,507 held by the United States of America since 2003 that teaches that the lack of psycho-activity in CBD allows doses that are 100-200 times greater than the tolerable dose of THC.
The articulated “Effective oral human dosage schedule is 20 mg / kg body weight” requires a considerable amount of cannabis. The simplest approach is to consume the trichrome laden fully mature flower along with the 80-day leaf. Patient responses have exceeded any expectations. 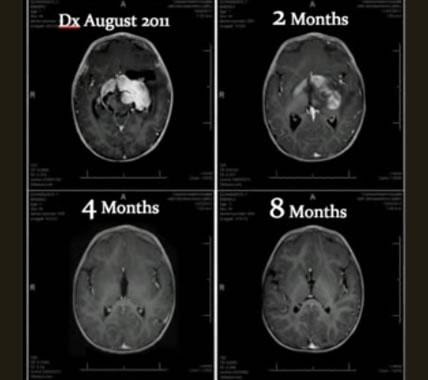 Above: The progression of healing in the 8 month old infant as the tumor
(large white center mass in upper left) gradually disappeared in 8 months
through treatment with cannabinoids.
Historically, dietary use of the entire raw cannabis plant brings us back in line with 34 million years of cannabis evolution. Lipid messenger molecules preceded cannabis by billions of years. The 4 billion year old development of lipid messenger molecules not only regulated resource management in the most primitive life forms, but were central in the earliest autocrine and paracrine modulation of cellular function.
I believe autocrine cross talk was the necessary precedent to symbiotic, then multi-cellular life forms. Tissue specific or paracrine cluster regulation is the domain of the lipid messenger molecules and is the path to comprehending the incredible diversity of function that are only now beginning to be understood. While our perception / publication of these physiologic properties are new, the phenomenal beneficial affects were there yesterday, last year, if not hundreds of millions to billions of years ago.
Researchers have now found that the compound, called cannabidiol, has the ability to ‘switch off’ the gene responsible for metastasis in an aggressive form of cancer. Importantly, this substance does not produce the psychoactive properties of the cannabis plant. 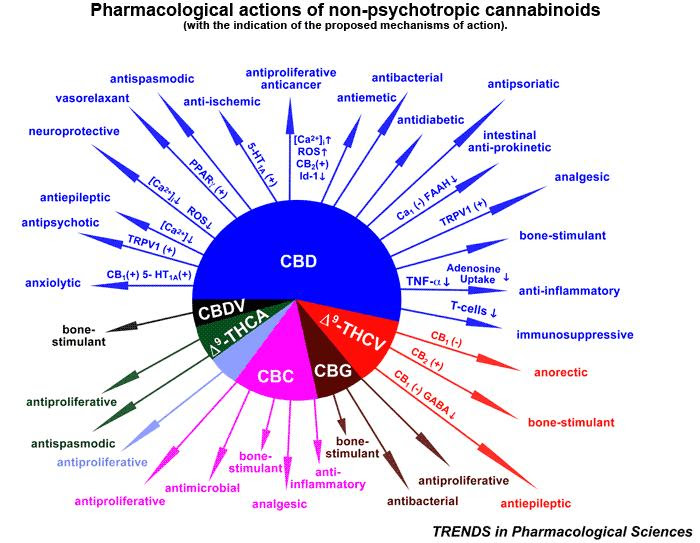 Cannabis Oil can prevent cancer, reduce heart attacks by 66% and insulin dependent diabetes by 58%. Dr. Courtney recommends drinking 4 – 8 ounces of raw flower and leaf juice from any Hemp plant, 5 mg of Cannabidiol (CBD) per kg of body weight, a salad of Hemp seed sprouts and 50 mg of THC taken in 5 daily doses.
“If you heat the plant, you will decarboxylate THC-acid and you will get high, you”ll get your 10 mg. If you don’t heat it, you can go up to five or six hundred milligrams & use it as a Dietary Cannabis. . . and push it up to the Anti-oxidant and Neuro-protective levels which come into play at hundreds of milligrams,” stated Dr. William Courtney.
“The Hemp plant is actually an excellent plant because the THC content can be low, that’s if you’re treating a condition for which appears CBD food supplement is in order. . .
The plants we’re using in Luxembourg have only 1% CBD, a 1% CBD plant is providing you with 19 times more CBD per pound than Oranges provide you of vitamin C. A 1% is an excellent source, you can make tremendous concentrates you can eat the plant raw – and the absence of the THC – you can heat Hemp, which you can’t do with other strains because the THC acid comes out and you end up with a psycho-toxic substance,” says Dr. William Courtney.